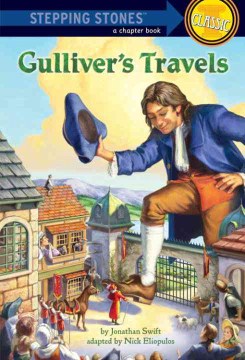 Guliver’s travels is a surreal novel depicting English politics at the time. It was written in 1723 and is still popular to this day. The metaphors and analogies it uses to explain the political aspects of England are both surreal yet depicted as accurate. Two things that bothered me the most when reading the book was the vocabulary and the printing. The vocabulary is difficult to comprehend and to translate into what makes sense for me. However, the printing in the book is very small which makes it even harder for me to understand. I would recommend this book to older teens and adults because of the vocabulary and the contents in the book.

These consecutive journeys of Lemuel Gulliver still resonate in the human condition.

When first published in 1726, much of the world was still a mystery and the fantastic lands and civilizations Gulliver stumbled upon were, perhaps, within the realm of possibility. It is good writing and a great glimpse into the British state of mind at the time. However, if you plan to read this to small children, be forewarned. There is a significant amount of sexual content mentioned; not sex itself but Gulliver repeatedly being seen naked or seeing giant women naked. I would think this work would have been considered extremely scandalous in its time.

This is not at all an easy read and therein lied its appeal to me because I now enjoy
challenging reads. I have read it not once, but 4 times already. I read many different versions of it. The one available in public domain has a nice glossary. It is essential if one has an earlier edition of the book. The edition I borrowed from the public library(by Eddy) has a very useful introduction. In addition, I also read another titled 'Gulliver's travels, a critical study' which reveals its background, an analysis of satire and the precedents to all of the ideas/concepts to be found in the book. This is probably one of the best books I have ever read. I'll read it again, no doubt.

I read this book to fulfil the goal read a book that inspiried a common phrase or idiom. in this case the word was yahoo. (it was one of the books suggested for the prompt by the internet) i didn't find it horrible. i did read the abriged version found in the kids section of the library. the introduction said that they just took out his political discorces to shorten it. i don't feel i missed much. the book overall was a little creepy and boring, but i could see how someone could like it. i was telling my seven year old about it, and he was asking me a lot of questions so maybe that's the mindset i need to enjoy it.

Love the stories, but difficult read, especially since the font is much too small

"How many villains have been exalted to the highest places of trust, power, dignity, and profit: how great a share in the motions and events of courts, councils, and senates might be challenged by bawds, whores, pimps, parasites, and buffoons: how low an opinion I had of human wisdom and integrity; when I was truly informed of the springs and motives of great enterprises and revolutions in the world, and of the contemptible accidents to which they owed their success."

In Swift's classic satire, the adventure-prone naval surgeon Gulliver finds himself repeatedly stranded in strange lands, where he meets the tiny Lilliputians, the giant Brobdingnagians, the ivory tower intellectuals of Laputa, and the superhuman intelligent horses, the Houyhnhnm. In the process, again and again he is confronted with the inexplicable base depravity of the human race, never more bitingly than in his encounter with the virtuous Houyhnhnm, for whom the men who live alongside them, the disgusting Yahoos, are a byword for foulness and a source of considerable perplexity.

Gulliver's Travels is often treated as a children's story and, apart from the modern dismissive attitude towards fantasy, it is difficult to imagine why. Swift's contempt for prideful, fallen humanity can only be described as Brobdingnagian. In the eighteenth century, this was understandably the source of considerable controversy, now, for some reason, it is only commented upon when Swift focuses his ire on the female of the species.

I'm not Irish, but I can understand the idea of traveling to distant lands, and seeing people who are like you used as slaves. Get out of there fast before you are lumped in with them...

Also, the real meaning of "Yahoo"? Maybe that internet company should change it's name, or we should boycott it.

This book was assigned to me as summer reading and I found it toneless, very long, and tedious. It was a book that I tried time and again to finish (just for the sake of the assignment), but the story itself was so uncompelling I found myself falling asleep more than once.
I finally finished the book by the deadline, but the journey to that last sentence was a painful one.
I advise that unless you have to finish this book as an assignment, or you are merely interested in how the cultural context surrounding this book manifested itself, don't bother reading it. It's not worth it.
If you do decide to read it, though, then good luck, my friend.

This is, of course, often mistaken for a children’s book, and for obvious reasons. First there is a voyage to a land of little people, then to a land of giants, then an island floating in the sky and inhabited by comical mad scientists/sorcerers (Swift seems to have thought of them as roughly the same, though they are on different islands), and finally a land of wise horses and brutish humans. This would seem to be standard children’s’ fare, until the reader gets farther along: there are a lot of scatological passages and worse – not suitable for children. Like “Alice in Wonderland”, first impressions are deceiving. What Swift has done is to cast a satirical eye on the society of his day, and take it apart piece by debased piece. The narrator, Lemuel Gulliver, at first seems to be the voice of reason; but then he begins to extoll the virtues of his own culture, with its wars, unquestioned class (caste) systems, slavery, and colonialization – and at first fails to understand why his audiences of little people, giants, and scientists are taken aback. Realization comes in the fourth part – he is just one of those wretched “Yahoos” after all, hiding behind a thin veil of civilization. At the same time, the various cultures he encounters on his voyages are crazy exaggerations of human society: the gigantic Brobdingnagians treat him as a pet or a sideshow (as European colonialists acted condescendingly towards other cultures); the scientists of Laputa are so wrapped up in contemplation (of truly ridiculous ideas) that they need “flappers” to hit them with stone-filled balloons on occasion to make them pay attention. …All in all, this is a complex and multifaceted piece of literature, hiding behind what at first appears to be an innocent fairy tale. One negative comment: I would have liked to read a version with notes explaining some of the more “obscure” sections that are no longer obvious to modern readers.

The book chronicles the adventures of world traveller Gulliver, and is a parody of travel books of the time. It’s divided into four sections that correspond with the four locations he visits. The first two are rather familiar — he’s super-big, then he’s super-small — the last two are less well known, but (to me) are the most interesting: his time upon a floating island of scientists, philosophers, and magicians, and lastly, in a land of intelligent horse-like creatures. It’s the most misanthropic (human-hating) book I’ve ever read (especially the last section) but yet again this is Swift’s way of manipulating the reader to respond a certain way. Due to the book’s age some aspects of it are difficult for modern readers like us, which is why I recommend a reading guide or notes to read along with the text.

It started out slow, but I thought Part 2 and Part 3 were much better than Part 1 and it is always interesting reading something that was written in a different time period to see what the perceptions of the world were at that time!

3 stars because it is a classic and because it was a good story idea. With that said, the writing style is often hard to understand and the storyline is very dull.

it really wasn't that good. the only parts that were fast paced and wanted you to read more were very short. however the idea of the book was very creative.

We all know what is thought of as the children's story of Gulliver's travels to Lilliput where he is a giant compared to the Lilliputians and to Brobdingnag where he is the tiny one. Children's editions of the book stop there, omitting the deep satire of the rest of Jonathan Swift's classic book. He hooks the reader with the first two phenomenally imaginative stories and then continues on to the biting commentary on human nature, morals, government, mortality/immortality and science that is his real purpose. After Brobdingnag, Gulliver encounters further amazing peoples, situations and inventions in four more imaginary countries, followed by Japan, as Swift's satire sharpens its edge. After returning to England, where Gulliver hoped to stay for the rest of his life, he takes one more trip, and ends up in the country of the Houyhnhnms, where the horses are the sentient beings. There you will meet the Yahoos. You may never think of that word or human nature in same light again!

it was an OK read, although it was a little hard to relate as this was written in the 1770s. Got to give the author credit for his idea on this story in 4 parts about his travels and discussing who and what he encounters and how it compares to his homeland. Each part he experiences something out of the ordinary. Curious to see how the movie with Jack Black will relate, if anything, to the book.

Boring, very difficult to get through.