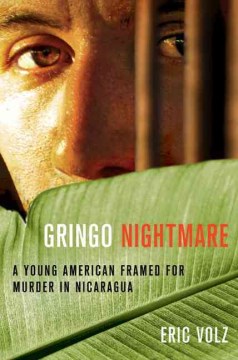 A Young American Framed for Murder in Nicaragua

Baker & Taylor
Documents the trial of an American journalist who was wrongly implicated in the death of a beloved Nicaraguan colleague, describing the horrific conditions to which he was subjected throughout a year in prison during which he fought to prove his innocence.

In the spirit of Midnight Express and Not Without My Daughter comes the harrowing true story of an American held in a Nicaraguan prison for a murder he didn’t commit.

Eric Volz was in his late twenties in 2005 when he moved from California to Nicaragua. He and a friend cofounded a bilingual magazine, El Puente, and it proved more successful than they ever expected. Then Volz met Doris Jiménez, an incomparable beauty from a small Nicaraguan beach town, and they began a passionate and meaningful relationship. Though the relationship ended amicably less than a year later and Volz moved his business to the capital city of Managua, a close bond between the two endured.

Nothing prepared him for the phone call he received on November 21, 2006, when he learned that Doris had been found dead---murdered---in her seaside clothing boutique. He rushed from Managua to be with her friends and family, and before he knew it, he found himself accused of her murder, arrested, and imprisoned.

Decried in the press and vilified by his onetime friends, Volz suffered horrific conditions, illness, deadly inmates, an angry lynch mob, sadistic guards, and the merciless treatment of government officials. It was only through his dogged persistence, the tireless support of his friends and family, and the assistance of a former intelligence operative that Eric was released, in December 2007, after more than a year in prison.

A story that made national and international headlines, this is the first and only book to tell Eric’s absorbing, moving account in his own words.

Baker
& Taylor
Documents the trial of an American journalist who was wrongly implicated in the death of a Nicaraguan colleague, describing the horrific conditions of the year in prison during which he fought to prove his innocence.