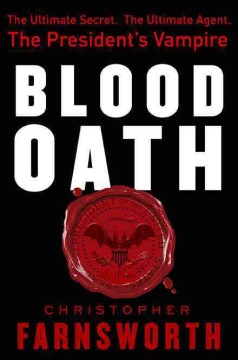 Zach Barrows is an ambitious young White House staffer whose career takes an unexpected turn when he's partnered with Nathaniel Cade, a secret agent sworn to protect the President. But Cade is no ordinary civil servant. Bound by a special blood oath, he is a vampire. Cade battles nightmares before they can break into the daylight world of the American dream, enemies far stranger-and far more dangerous-than civilians have ever imagined.

Blood Oath is the first in a series of novels featuring Nathaniel Cade-the President's vampire.

"Christopher Farnsworth's taut thriller Blood Oath is an irresistible page-turner.... A complex and unnervingly realistic tale in which vampire Nathaniel Cade is far less of a monster than his human colleagues at the CIA and FBI. Dazzlingly clever."—The Washington Post

"Blood Oath is exactly how I like my Presidential thrillers. With vampires."—Brad Meltzer, author of The Book of Fate

"Blood Oath is the vampire novel that finally gets it right. Christopher Farnsworth has done his homework in places where most writers wouldn't even know to look-and the result is a rollicking tale of the supernatural grounded in some of the true oddities of American history. If Dan Brown wrote a vampire thriller, this would be it."—Mitch Horowitz, author of Occult America

"As someone who thinks Stoker's Dracula has never been bettered, and who would happily stick a stake through the heart of most modern vampire fiction, it almost pains me to say how much I enjoyed Blood Oath. Witty, exciting, and compulsively readable, with a central character who seems destined to become a favorite of both skeptics and true blood believers, this may just be the best debut vampire novel in many years." —John Connolly, author of The Lovers

It was a really good book. I liked the short background notes at beginning of each chapter. His depiction of a vampire I felt was spot on. Best line was that humans are food and then he asked Zach if he wanted to have sex with a cow. Hilarious.

Kinda boring.About half way through and just coasting along. Nothing much happening. Just the new boy getting his fingers burned in every socket.

First one I've read in this series. It has lots of action, gore & a scary premise. Interesting characters & a wry humour.

Sounds terrible when I read the jacket but surprisingly engaging characters and well written.

Just finished listening to the audiobook version of this title at 4 a.m. this morning - EXCELLENT!

Very entertaining. This book reads like a movie script and, to an even greater degree than is usual, had me casting people in roles.

bikeynw thinks this title is suitable for 10 years and over