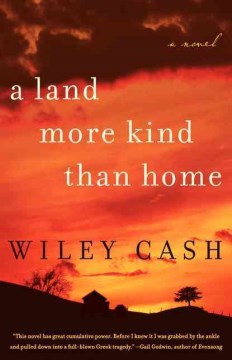 A Land More Kind Than Home

Baker & Taylor
Jess Hall, growing up deep in the heart of an unassuming mountain town that believes in protecting its own, is plunged into an adulthood for which he is not prepared when his autistic older brother, Stump, sneaks a look at something he isn't supposed to, which has catastrophic repercussions. 100,000 first printing.

&;This book will knock your socks off&;.A first novel that sings with talent.&;
&;Clyde Edgerton

A stunning debut reminiscent of the beloved novels of John Hart and Tom Franklin, A Land More Kind Than Home is a mesmerizing literary thriller about the bond between two brothers and the evil they face in a small western North Carolina town

For a curious boy like Jess Hall, growing up in Marshall means trouble when your mother catches you spying on grown-ups. Adventurous and precocious, Jess is enormously protective of his older brother, Christopher, a mute whom everyone calls Stump. Though their mother has warned them not to snoop, Stump can't help sneaking a look at something he's not supposed to&;an act that will have catastrophic repercussions, shattering both his world and Jess's. It's a wrenching event that thrusts Jess into an adulthood for which he's not prepared. While there is much about the world that still confuses him, he now knows that a new understanding can bring not only a growing danger and evil&;but also the possibility of freedom and deliverance as well.

Told by three resonant and evocative characters&;Jess; Adelaide Lyle, the town midwife and moral conscience; and Clem Barefield, a sheriff with his own painful past&;A Land More Kind Than Home is a haunting tale of courage in the face of cruelty and the power of love to overcome the darkness that lives in us all. These are masterful portrayals, written with assurance and truth, and they show us the extraordinary promise of this remarkable first novel.

Baker
& Taylor
Growing up in a small North Carolina town, Jess Hall is plunged into an adulthood for which he is not prepared when his autistic older brother, Stump, sneaks a look at something he is not supposed to see, which has catastrophic repercussions.

A riveting, coming-of-age tale set in a rural North Carolina community which is devastated by the grip of its fanatical church leader. As tragic events envelope his family, Luke's quest to
make sense of events challenge his innocence. A real page turner!!

A strong story with strong characters. It had a feel of the backwoods of America & was told by the voice of three different people. The story centers around a church that practice snake handling & fire. The preacher was a strong charismatic man but I'm pretty certain he had an agenda of his own.
One Sunday evening the preacher causes the death of one of the children of the community & this story is the awful consequences of that probably deliberated act. Not a feel good book.

Loved the characters. The "Southern Gothic" here is more about "haunted by poverty and isolation" than "ghosts roaming plantations." My one quibble is that the setting seems to be the 1980's (all that sweating in non-AC spaces) and I didn't think that cooking meth was on anyone's radar back then.

The setting and storyline were absolutely riveting. The subject matter resonated with me having been raised strictly Christian. But I knew nothing about the genre when it was recommended to me and would have avoided it if I had read the keywords gothic or thriller, to be honest. Very well written though and impossible to put down.

This is a great book. It explores into a church that practices snake handling. I would consider it a thriller. It shows what a terrible cost an eye for an eye can have on an entire town let alone a family. It is the story of how an evil person can put up a front of being a God fearing person. When in reality he had the ability to make others do terrible deeds in the name of God and religion.
This is southern gothic at its best. Mr. Cash lives in North Carolina.

It's books like these that give me hope for humanity and belief in God's grace and man's predilection for redemption. It was powerful strong writing and the type of book I can't wait to read again from a whole different perspective. I love country slang and love when people say things like, "It's just down the road a piece." I try to add it to my St. Joe vernacular whenever I can. Wiley Cash makes me want to read Faulkner and Twain in hopes of picking up new lingo. I think I'm as bored with modern English as I am with modern man. Although I do love being able to read books on my phone. It makes it so much easier and less conspicuous to read at work, weddings and funerals.

A Land More Kind Than Home is a southern gothic tale of good versus evil, cruelty versus innocence and as all the pieces mesh together to form a flawless narrative, the reader is engulfed by this powerful, unforgettable story. This debut novel introduces an author that is able to deliver an inspired, substantial and heart rendering story and shows promising possibilities for his future efforts.

This story told from different viewpoints centres around a North Carolina revivalist church and its pastor Carson Chambliss, a man obsessed with snakes and poison and their ability to heal. I found him very creepy and kept shaking my head at the effect he had on his congregation. Julie Hall is smitten with him and his teachings and believes he can heal her mute son. Things go terribly wrong and the fallout descends on all her family. The pace is measured and the narrative from the three viewpoints is easy to follow. The reader is left with questions, and if in a book group, could explore the whys and hows for hours.