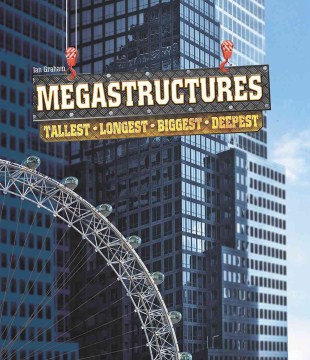 Baker & Taylor
An in-depth, interactive tour of some of the world's most massive structures includes profiles of such examples as the Burj Khalifa Skyscraper, the Hoover Dam and London's Olympic Stadium and is complemented by a glossary of terms, gatefold spreads and a list of additional resources.

An in-depth look at the world's mightiest structures.

Stunning foldout pages, panels, diagrams, photographs and "Mega Facts" boxes make this book a stimulating read for all ages. Megastructures describes how and why these structures were designed and built. It explains the physics behind the designs, which allows buildings, dams or bridges to rise to incredible heights, withstand enormous pressures, and resist collapse from environmental forces.

The book is organized into four sections.

Gigantic Lengths: wide and long, over and under

In each chapter, Megastructures also looks at Failures and Accidents, including such frightening events as windows falling out, roofs collapsing, floods and explosions. Future chapters in each section describe the monsters of tomorrow, like the pickle-shaped Gherkin tower, the Lake Vostok tunnel deep under Antarctic ice and the Bering Bridge linking the USA and Russia.

A glossary of words highlighted in the text, a resources section and an index round out this riveting book.

Baker
& Taylor
A tour of some of the world's most massive structures includes profiles of the Burj Khalifa Skyscraper, the Hoover Dam, and London's Olympic Stadium.