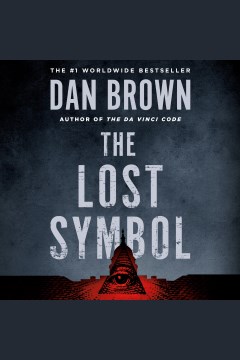 Dan Brown’s new novel, the eagerly awaited follow-up to his #1 international phenomenon, The Da Vinci Code, which was the bestselling hardcover adult novel of all time with 81 million copies in print worldwide, will be published in the U.S. and Canada by Doubleday on September 15, 2009.THE LOST SYMBOL will have a first printing of 5 million copies, and it will once again feature Dan Brown’s unforgettable protagonist, Robert Langdon. Brown’s longtime editor, Jason Kaufman, Vice President and Executive Editor at Doubleday said, "Nothing ever is as it first appears in a Dan Brown novel. This book’s narrative takes place in a twelve-hour period, and from the first page, Dan’s readers will feel the thrill of discovery as they follow Robert Langdon through a masterful and unexpected new landscape. THE LOST SYMBOL is full of surprises."Dan Brown’s popularity continues to grow. The film of The Da Vinci Code was a #1 box...
Publisher: New York : Books on Tape, 2009
Edition: Unabridged
ISBN: 9780307704061

This book was pretty entertaining. Although it is fiction, it makes you think about a lot of beliefs and how we got to where we are today in true Dan Brown fashion. Only 4 stars because it’s overly tedious at times and the ending fell flat for me.

This is a highly entertaining, page-turner of a story, with lots of action and loads of Washington curiosities, at least until the climax, after which it degenerates into annoying proselytizing. More seriously however, it is troubling to see yet another author/entertainer using conspiracy theories and clever misinterpretations of science to seduce his/her audience into believing the false narrative that mysticism and science are to be given the same credibility, or that science actually supports mystical or religious ideas. The last thing this world needs today is more people scorning the advice of genuine scientists (or experts in any field) to believe just what they want to believe, or what some huckster seduces them into believing. At best this leads to innocent delusions, but more often this leaves people vulnerable to exploitation (by unscrupulous advertisers, politicians or deep-pocketed industrialists) and at worst this can and often does lead to selfish and destructive behaviour both at the personal and societal level. The author wraps mysticism in a thin veneer of pseudo-science with a heavy load of misleading references to well-known historical figures in order to make it sound more credible. I admit that this adds substantially to the entertainment value, and that sometimes suspension of disbelief is a good thing, to better engage the reader in an innocent fantasy, but in this case I fear that there is the real potential for danger. There are already far too many people who prefer to trust conspiracy theories rather than fact-based authoritative experts, particularly when the experts advise us that we need to make difficult decisions. This genre only encourages that tendency, which is dangerous to the future well-being of society, and of the planet.

This is my second favourite (after The DaVinci Code) Dan Brown book.

The only reason I read this was because I had been to Washington recently and wanted to read about the places I've visited. There were definitely holes in this book but I did still find it fairly interesting owing only to the Freemason information and the historical buildings mentioned in the novel.

Love the series, but hated this book. I could not follow. The romanticism was lost in the setting.

This book was okay for the most part, just the ending is lacking. The book is enjoyable and worth while to read if you are a fan of Dan Brown/Robert Langdon. The puzzles and plot of the book was good and fast paced it only started lacking toward the end and seemed summed up quickly and without a final resolution of many points. My hubby and I read it together and he seems to agree with the idea of over all enjoyment but a lacking ending.

Many people are calling this the worst of Dan Brown's books and it was overlooked for a possible film, with Inferno coming out recently, but I really enjoyed this book particularly because it took place in Washington DC, an area more familiar than Rome or Paris or the other books. I found the dramatic parts suspenseful and the historical parts fascinating.

I liked his very first book, after that I find it a waste of time.

csrestall thinks this title is suitable for 14 years and over

RobertELPL thinks this title is suitable for 16 years and over

SPELL thinks this title is suitable for 13 years and over

Bazooka_B9 thinks this title is suitable for 13 years and over

jfeng thinks this title is suitable for 14 years and over

Gulp thinks this title is suitable for 16 years and over

Kellyba thinks this title is suitable for 18 years and over

Frightening or Intense Scenes: Fights in the dark, blowing things up, drowning people...

a more detailed look at the Franklin Square featured in the book:

Here shows many others, first and third squares were featured in the book:
(the sums of corner/center 2X2's and the 4 corners of the first one are 34 as well):

This is one of Dan Brown's three best books. If you liked Angels and Deamons or The Da Vinci Code, then you will love this book!

WORST book I've ever read! Normally I'd garbage a book like this after the first 40-50 pages. This time I struggled through it despite my strong inclination to throw it out the window. Should have gone with my inclination!

Robert Langdon is tricked into coming to Washington DC by a mad man bent on recovering the ancient mysteries of the Masons. He kidnaps a friend lf Langdons, Peter Solomon and severs his hand to start Langdon on a series of puzzles to decode an ancient pyramid which contains a map to the ancient mysteries. He must decode this map in order to save Peter at the request of his kidnapper. Mal'akh the mad man also attacks Peter's sister Katherine over her research in Noetic science which is connected to the ancient mysteries and has proven the existence of the soul. Of course Langdon prevails and saves his friends as well as uncovers the secret of the ancient mysteries.

This book is about the latest adventures of Robert Langdon