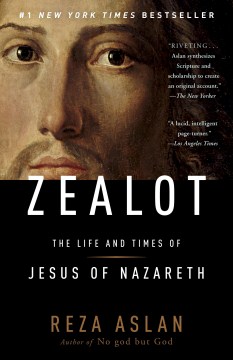 The Life and Times of Jesus of Nazareth

#1 NEW YORK TIMES BESTSELLERNAMED ONE OF THE BEST BOOKS OF THE YEAR BY BooklistPublishers WeeklyBookishFrom the internationally bestselling author of No god but God comes a fascinating, provocative, and meticulously researched biography that challenges long-held assumptions about the man we know as Jesus of Nazareth. Two thousand years ago, an itinerant Jewish preacher and miracle worker walked across the Galilee, gathering followers to establish what he called the "Kingdom of God." The revolutionary movement he launched was so threatening to the established order that he was captured, tortured, and executed as a state criminal. Within decades after his shameful death, his followers would call him God. Sifting through centuries of mythmaking, Reza Aslan sheds new light on one of history's most influential and enigmatic characters by examining Jesus through the lens of the...
Publisher: New York : Random House, 2013
ISBN: 9780679603535
Characteristics: 1 online resource

The author is a “scholar of religions,” not a religious scholar, and that distinction shows in his approach to the man whose story formed one of the world’s largest religions. Going into historical records found in Jewish, Christian, and pagan sources, Reza Aslan paints a believable portrait of a Jewish activist, one among many in his time, who sought to restore the nation of Israel and escape Roman occupation. The epilogue solidifies the theme: “Two thousand years later, the Christ of Paul’s creation has utterly subsumed the Jesus of history.” Aslan finds “the radical Jewish nationalist who challenged Roman occupation and lost” to be “every bit as compelling, charismatic, and praiseworthy as Jesus the Christ…in short, someone worth believing in.” A number of reviewers have noted that his work is not new, mostly consolidating the work of other scholars. That’s not a fault, in my opinion, and he does a thoroughly enjoyable job of organizing the history, making both the nature and the conclusions of the research accessible in a form that reads like a historical novel.

Once again, I'm kicking myself for waiting two years to read something.

While this book explores Jesus the person, not Jesus Christ, the messiah, it isn't simply about the man's life. Aslan describes the context that Jesus' movement rose up in: thanks to the Maccabees, Israel had enjoyed about a century of independence after Hellenistic rulers before infighting and ineptitude at the top created an opening for the Romans to jump into. As vicious as some of their administrators were- even Augustus expressed a little horror at Herod's excesses- the banal corruption exhibited by the priest class wasn't much better (and, in fact, it was pretty much a requirement that the priests work hand-in-hand with the governors).

It doesn't take much imagination to realize that after centuries of war, infighting and constant political turmoil Israel was a place of Haves and Have Nots. It was the Have Nots that Jesus and the other prophets of his generation were speaking to; in other words, Jesus' message was a predominantly political one. When he called himself The Son of Man, he was making reference to an old code for King, and when he talked about the coming of The Kingdom of Heaven, he was referring to the "kingdom" that would be born of an actual revolution in which, literally, the meek would inherit the earth.

Jesus wasn't the only promised messiah of his time, and his execution at the hands of the Romans (and it was the Romans, no matter how hard Paul tried to twist it later) excluded him from the title. This is why the story of the resurrection was necessary in order to keep Jesus alive (as it were). As with Jesus miracle working, I imagined Aslan stepping back from his keyboard with his hands up. As he notes, there is no historical or factual explanation for resurrection, and can't be argued along those lines. The issue is not whether it happened, but that all of his adherents came to insist that it did. This allowed Jesus the man to begin the evolution into Jesus the deity, and without this Christianity would not have taken hold.

The throughline for Aslan is that Jesus was first and foremost a radical, rabble-rousing Jew who had specific, worldly ambitions for his fellow Jewish brethren. He also notes that Jesus was probably illiterate, as was a staggering 95%+ of the population at that time. That might explain some liberties his gospels take with the source material, although it's not clear what kind of education he might have learned from the man who would later be known as John the Baptist. As he notes, it's a tragedy that Jesus the revolutionary isn't as well studied as Jesus the messiah.

Recommended for anyone interested in the history of religion

This take on Jesus was totally unexpected for me. Still considering everything I read. Thought provoking, super interesting.

"Zealot: The life and times of Jesus of Nazareth" by Reza Aslan was OK but not my favourite 'historical Jesus' book - which is a bit of a favourite genre of mine.

I give this book a 6 star rating!
Very well researched material not to mention an incredible story telling that engages the reader. It took Reza Aslan 20 years to do the research and put this together. I will warn you that if you grew up in a traditional Christian home regardless of denomination, there are some very controversial arguments that you may not be comfortable reading. However, the point of the book is to tell the story of Jesus of Nazareth not Jesus the Christ. I was blown away by the author’s ability to paint the picture and describe the social and political issues of that particular time period. What makes this topic so difficult to research is that not much is known about the historical Jesus and the author had to reconstruct the setting based on accounts of other historians who wrote after his death. The fist gospel about Jesus wasn’t written until 40 years after his death. A lot had happened in that time frame which shaped the outcome of how Jesus was portrayed. Additionally, a majority of the New Testament was written by Paul who viewed Jesus in a different light than the disciples before him. Whatever your view point may be, I encourage every reader to look at this text with an open mind and decide for yourself what you believe and what you don’t. I choose to give credit where credit is due and I appreciate the author writing about such an important historical event that challenges people to examine the setting and issues from a different lens.

The author gives lots of detail about the politics of the day and gives plenty of references. Very interesting.

An eye-opening, mind-expanding book. For those who have been relying to understand Jesus through sermons and Bible studies, it offers a refreshing dose of historical context.
The edge is twofold, however. On one hand, the things Jesus says and events in the Bible start making much more sense. On the other, the possibility of losing the traditional Sunday-school understanding of him/Him becomes extremely real.
One of the reviewers said that the faith of believers may not be shaken much by this book. I disagree. But shouldn't we all seek to know more, not less, about God?

For those of you who are familiar with the work of a group of religious/biblical scholars known as "the Jesus seminar" , this book adds very little new information. He largely summarizes the work of other scholars.
However, he writes in a very accessible way for everyone. He effectively explains the numerous contradictions between the scant historical record and the Bible.
The Bible is an article of faith and not a historical record

I greatly enjoyed reading Aslan's "Zealot" as it has brought me closer to who I believe the "real Jesus" was. Certainly nothing in common with the Jesus of the old myths.
This man was a rebel, a revolutionary thinker and most of the hokus pokus acts attributed to him and virgin births were likely added by some fans to fluff the story of a Messiah a bit.
Excellent read. I recommend reading it once accompanied by Reza Aslan's narrated audio book. It's a quite a treat.

And the more the movement was shaped by these new 'pagan' converts, the more force fully it discarded its Jewish past for a Graeco -- Roman future.

Little by little over the following decade, the Jewish sect founded by a group of rural Galileans morphed into a religion of urbanized Greek speakers.

God has granted us the power to die bravely, and in a state of freedom, which was not the case for those who were conquered unexpectedly.

No lord but God!

What Pilate was best known for was his extreme depravity, his total disregard for Jewish law and tradition, and his barely concealed aversion to the Jewish nation as a whole.

Crucifixion was a punishment that Rome reserved almost exclusively for the crime of sedition.