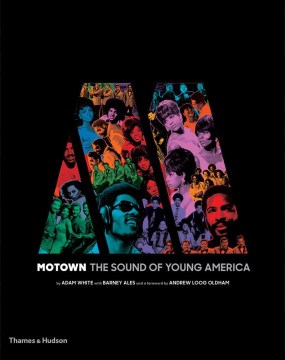 The Sound of Young America

WW Norton
The official visual history of Motown, the legendary record label that brought us some of the greatest recording artists of all time—from Stevie Wonder, Diana Ross and Smokey Robinson to Marvin Gaye and The Jackson 5—and changed music forever
Motown: The Sound of Young America

Baker & Taylor
A visual history of the legendary record label that was home to The Jackson 5, Diana Ross, Stevie Wonder and Smokey Robinson features images from the Motown archives, specially commissioned photos, and pictures from the personal collections of the founders and artists.

Book News
White, who writes about music and the music industry and was an executive at a record company, and Ales, who worked at Motown Records, offer an illustrated history of the record company and Motown style, from its beginnings in Detroit to its move to Los Angeles, with discussion of artists like Stevie Wonder, Smokey Robinson & the Miracles, Diana Ross & the Supremes, Marvin Gaye, the Jackson 5, and the Temptations, with photos and images of records and album covers. Annotation ©2017 Ringgold, Inc., Portland, OR (protoview.com)

Baker
& Taylor
An official visual history of the label shares new research, a dazzling array of images, and unprecedented access to the archives of the makers and stars of Motown.
"Motown: The Sound of Young America is the definitive, visual history of the Detroit-based independent record company which became a style unto itself, a prolific and hugely successful production line of suave, sassy and sophisticated music through the sixties, seventies and eighties. Featuring extensive, specially commissioned photography of treasures gathered from the archives, this landmark publication also captures the graphic and design iconography that underpinned Motown's extraordinary creativity.Packed with fresh insights gleaned from scores of interviews with key players, this exceptional and revealing book delves into the workings of the Motown machine and details how a dedicated team of backroom believers, white and black, turned a small family business into a popular music powerhouse. This was the home of Stevie Wonder, Smokey Robinson & the Miracles, Diana Ross & the Supremes, Marvin Gaye, the Jackson 5, the Temptations and many more. Motown: The Sound of Young America is a spectacular labour of love befitting an incredible story"--