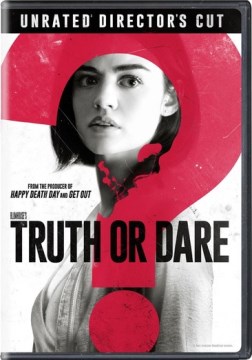 Thought this movie was going to suck but turned out to be very entertaining, thrilling, suspenseful, and fun.

Not Bad, not good. It's a young peoples type of movie.

I actually enjoyed the movie. I was not scared but I believe that has to be due to my age plus I watched it during the day. But to me the movie seemed to be an original idea and that impressed me alone. Also, they made the story from a childhood game that I know most people from my generation did play as computers were not around, Beta, VHS, computers and TV's with 100 stations plus where not around either. So a lot of the time you would go out and play games with neighbourhood children of all ages. So I found it impresses how they carried out the movie with a game I knew from my childhood. Overall I enjoyed the movie. Would have enjoyed it even more at age 7 when I use to get freaked out with the old Frankenstein movies.

It was ok not scary to me except for the faces but seriously not scary. It was ok just another horror movie that has game everyone played except it became evil due to the story line.

Turned out to be a surprisingly good movie. Some acting was good, others were so-so. Overall, an enjoyable movie. The idea is quite novel and the pace was good. Good for date nights.

Teenager level horror film with characters that are very unlikable. You can easily miss watching this movie and not regret it. Very typical horror film that flows with all the low budget films of its type.

I was expecting the worst and this was far from it. It was an entertaining, final destination type film. It was a lot better than what I figured I'd be watching.

I read the online reviews about this film before watching it so I kind of had a biased view of it when my girlfriend wanted to watch it (I thought it was going to be terrible and cheesy). It was actually enjoyable and slightly creepy. The characters did frustrate me just because they kept splitting up. The film was slightly predictable but the ending did surprise me. I would recommend it but don't expect to be scared out of your mind.

Truth--i didn't understand the ending until i watch a special feature.